Mr Protz has hit the nail on the head with his recent, and excellently crafted, tirade against the utterly humourless Portman Group and it's prompted me to start this petition, please sign up to it.

In my opinion names like Skullsplitter and Liquor Mortis should be actively bloody encouraged!

Because they tell me straight up front that they are strong.

These kind of names say, quite clearly, mess with me at your peril - if you want to wake up feeling like a Norse invader has cleaved your head in two then go ahead big boy! Try drinking four pints!

Interestingly, and not so long ago, a very senior figure in the spirits industry suggested to me that the Portman Group's days were numbered because, in his opinion, they'd basically stamped out all the ridiculous products - clearly aimed at a very young market - coming from his sector.

It would appear, however, that the Portman Group recognised this too and are now busy justifying their existence by attacking the brewing industry.

If we don't all make a stand now, this could get very, very ugly.

NEW ADDITION: In the spirit of accurate journalism, I really should have checked out whether or not the Portman Group was planning action against Orkney, instead I listened to the grapevine, they aren't apparently but my points about Brew Dog and the concerns I have over Portman's new stance stand - but fair is fair!
Posted by Melissa Cole at 03:57 4 comments: 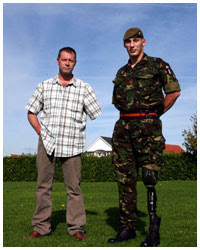 This Saturday I'm honoured to be supporting the Help for Heroes march from Portsmouth to the Tower of London by providing beers for the guys & gals of the army at the end!

Whatever you may feel about the political rights or wrongs of our actions in Iraq or Afghanistan, you have to admire and support the men & women of the Forces who are fighting out there, and it's even more important to support them if they return injured.
Help for Heroes raises funds for Headley Court Military Hospital, which is specialised in the treatment of orthopaedic and sports injuries, spinal injuries, neurological rehabilitation and rheumatic disease. The rehabilitation staff of around 200 include specialist medical officers, nurses, remedial instructors, physiotherapists, occupational therapists, speech and language therapists, a cognitive therapist, social workers, engineers, and administration support staff.
As you can imagine, this requires quite a lot of support and H4H is instrumental in the hospital's funding and has already raised £8m to make the lives of those injured as whole as possible again - as you can see from the picture.
And, it's also worth bearing in mind, that the developments and breakthroughs in all of the above medical disciplines are then used in the wider medical community and could therefore one day benefit you or a loved one.

My small display of support wouldn't have been possible without the kindness of many different breweries - Shepherd Neame gets a big thanks for its support by sending nearly 500 bottles of beer, also thanks to all those brewers who agreed that any left over beer from our pre-GBBF bash could go to this worthy cause, thanks also to Moorhouse's, Coors, R&R, Stiegel, Purity and a gang of Welsh brewers who are also sending some stuff through, I'll name-check you when I know what's coming in guys!

Also, last but not least, thanks to my boys at Utobeer who are warehousing and delivering all the beer for me - lads, couldn't do it without you - kisses!
Posted by Melissa Cole at 03:13 No comments:

GBBF is No Good for Feet

Well, the tours seem to be going well, I've met a lot of lovely people and managed to enthuse (I think) even the most hardened beer rejector who came along.

My feet are killing me and I'm absolutely shattered but it's been great fun. It's been an unfeasibly busy time with the media as well as the beer, and there's been some great coverage/article opportunities - not least being one of the four most read articles on the Times Online yesterday! I'm a bit chuffed with that!

Find of the festival that I would really like to see more widely available is Caledonian's Deuchars XPA - it's like the IPA on steroids!

With more floral and tropical fruit aromas on the nose, and ever so slightly more creamy in the mouth it's an absolute stunner!

Other beers that I've loved have been Cribyn from Breconshire Brewery (not to mention the Ysbrid y Draig in Bowmore casks that Buster kept back for me, I love that man!), Otley's OG which won a gold medal in the strong category and Whitstable's Raspberry Wheat, which is even nicer in cask than bottle.

Other highlights have been Bateman's Salem Porter, which is in awesome nick, Moorhouse's Premier and Cairngorn Trade Winds.

Still not sure what I think of the new Canterbury Jack from Shepherd Neame, it's coming off a bit bland at the moment BUT when you're at something like the GBBF it's very easy to dismiss lower gravity beers that aren't trying to shout at you, but whisper gentle drinkability.

I'll revisit when my tastebuds haven't been partying for three days straight!
Posted by Melissa Cole at 22:54 4 comments: