Send Yourself to Siberia!

Come and drink beer with me!

Because today, Wednesday April 4, I shall be launching my collab beer with Ilkley Brewery, which is also a saison called Siberia, which has been made with Yorkshire forced rhubarb, vanilla, grains of paradise and orange peel - yep, another mental one from me! 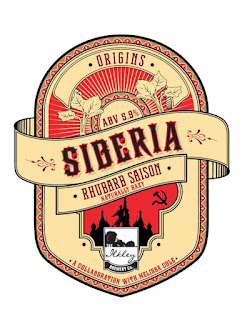 The Siberia is fab, I'm really pleased, it was spicy peach on the nose, a tiny bit sour, pleasingly spicy and orangey on the palate and absolutely bone dry, it's lush! :)

Here's the agenda for the pub crawl we're embarking on, which could be dangerous as this beer has rocked out at 5.9%, eek!
5.30pm: The Bull, Highgate
6.45pm Southampton Arms
8.15pm Draft House Tower Bridge
9.30-close The Rake

P.S. In case you're wondering why it's called Siberia, it's because rhubarb originates from Siberia, something I only found out when researching it - every day is, indeed, a school day! :)