Over the weekend I caught up with some reading I've been meaning to do since I ordered, what can only be described as, a plethora of beer books.

I finally got around to flicking through Jeff Evans' Book of Beer Knowledge, which is a fun romp through a load of trivia which will assist me greatly in planning beer quizzes in future! And I also perused excitedly through Stan Hieronymous's Brew Like a Monk and Jeff Sparrow's Wild Brews - both of which definitely got my brewing blood racing! 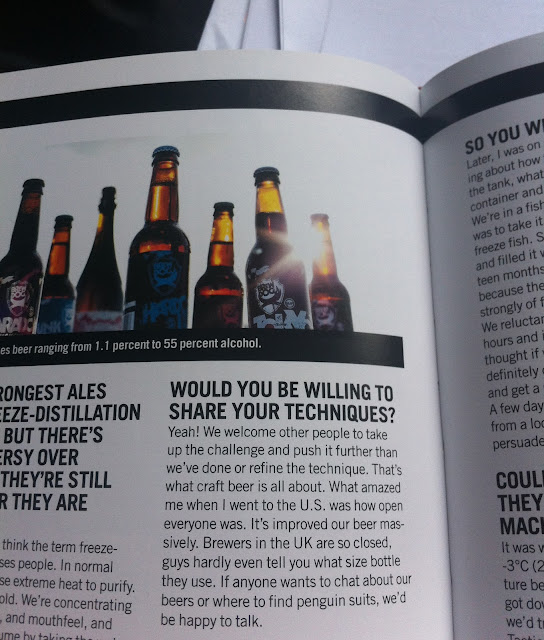 However, unfortunately, there was also something that made my blood pressure shoot up so high I'm surprised it didn't come spurting out of my ears - and that was Greg Koch and Matt Allyn's The Brewer's Apprentice.

Now, I should clarify here, it's actually not the book itself that's the problem, I like it, I like its content, I like its concept - in fact to get that many world class brewers in one book from Schneider to Lost Abbey, Dogfish Head to Cantillon and Russian River to Fuller's is a truly wondrous thing.

But when I got to the BrewDog page I was so incensed by their comments I actually chucked the book down in disgust.

I don't think I need to go into why BrewDog do what they do, I think we're all familiar with their shock tactic methods by now, but it's one thing to thumb your nose at authority and it's another to tell outright lies.

If the UK brewing industry is so damn unfriendly why is it that Stuart Howe of Sharp's is going up to Sheffield this week to present a cheque for over £6,000 to a hospice after the whole brewery staff gave up their weekend for free to help bottle and package a special charity beer called DW, brewed after Howe heard that fellow brewer and leged Dave Wickett was diagnosed with bone cancer?

If it's so miserable and unsharing, how is it figures like John Keeling of Fuller's or Mark Tranter at Dark Star, amongst many others, are trotting around the country doing brews at small craft places like Marble or Magic Rock? And using their, much larger, PR machines to publicise it? Not to mention the amount of beer writers and bloggers to who are now welcomed through brewery doors to do collaboration brews.

I also know for a fact that brewers all over the country regularly borrow raw ingredients off each other, seek advice on things that have gone wrong or just ring each other up for a natter about their next beer; I could go on but it would seem pointless in a way because I'm pretty sure it will fall on deaf doggy ears.

What I will say is this though: this is utter, utter rubbish and I would implore you not to listen to it.

The UK brewing industry is not only booming and forward-thinking, it is also fabulously friendly and I feel, quite strongly, that BrewDog owes the industry as a whole a bloody enormous apology.
Posted by Melissa Cole at 03:10 69 comments:

No Female Beer for NZ Competition

Wow! It's bad enough that rubbish like 'beers for the ladeez' are foisted on women in the UK, but at least there isn't the archaic attitude recently demonstrated at a show in New Zealand where a woman wasn't allowed to enter a home brew competition because, well, she's a woman!

The awesomely-named Rachel Beer was told that she could enter her beer but it wouldn't actually be judged because, wait for it, it was a blokes-only competition.

Initially I thought it was just one dinosaur who had put everyone else in a bad light... but then, oh then, I saw this bright idea from the show president Mike Smith in this article from the New Zealand Herald.

He suggested Ms Beer put a proposal to his committee for a women's or mixed sex section next year.

WTF? Are you kidding me? Is that supposed to make it all better?

I actually find that more offensive than the outright sexism of the original exclusion because this fossil can't seem to recognise that it doesn't matter, as Ms Beer so bluntly and brilliantly put it, whether someone has balls or not - the entry should be judged on the quality of the brew!

I am also cross at how badly this reflects on the NZ beer scene, because I've tried quite a few of the craft brews coming from that neck of the woods and they are excellent and I also know some of the brewers, most notably the boys at Epic, and couldn't find their attitude to be more diametrically opposed.