On Saturday at the Draft House Tower Bridge the lovely, delightful and talented Mr Stu 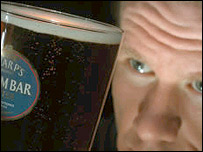 art Howe from Sharp's in Cornwall will displaying his wares - and possibly some beer.

The first session at 1pm is for ladeez only and is an in-depth tutored tasting with food matches, so if you are of the female persuasion and want to come, then please rock on over to the Barley's Angels Facebook page and sign up. There will then follow at 3.30pm  a small public sampling session, no food but the chance to chat informally with The Howe himself.

Cask 3 year old Massive ale
Turbo Yeast Abhorrence from Beyond the Ninth Level of Hades
Bottled Monsieur Rock
Bottled Single Brew Reserve 2010
Bottled DW
Another bottled beer yet to be decided
So, hopefully that will be enough to wash the rather unpleasant taste out of all our mouths left by the comments about beer by a Royal press officer this week !

NB: I have a financial interest in this venture
Posted by Melissa Cole at 01:40 3 comments:

I've got loads going on this summer in terms of events, so I thought I'd let you all know now so you can sort out your diaries (cue a deafening silence in response to the breathtaking arrogance of this statement!).

Firstly though, ploughing boldly on, a friend showed me something particularly terrifying yesterday in the pub, and once he'd put that away he also pointed out that my book is available to pre-order on Amazon!!! Whoooop! Guess I'd better get a wiggle on and finish it then!

I'm also running tastings at quite a lot of festivals this summer too, so I thought I'd put a little diary of what I'm up to, and also the Meet the Brewers at lovebeer@borough above the Rake will be returning on some Saturdays during summer - I just need to sit with the lads and figure it all out.

Finally, before you can start filling up that diary, I'll be on the tellybox Thursday and Friday evening, Sky 249, 7pm, Market Kitchen with the hilariously funny and wonderful Richard Corrigan - I have to say I fell a little bit in love with his brilliantly crazy ways! And the food was fantastic - apart from the jellied eel terrine, just couldn't get on with that and I'm sure that makes me a bad Londoner and my East End grandparents are probably spinning in their graves!

Ludlow Spring Festival kicks it all off on the weekend of May 7-8, I'll be doing a tutored beer & food matching using brews from all over the SIBA Wales & West region, and pairing it with local produce - after which I'll be heading off to Otley to brew our long-anticipated elderflower and gooseberry IPA!

I'll be a busy girl at the Bury St Edmunds Real Beer & Food Festival - I'm doing about six talks with Greene King over two days (phew! just tired thinking about it) - and I'll be competing to outshine the lovely Henry Chevallier from Aspall Cyder too, bring it on!

On June 19 I'll be at Cheltenham Food & Drink Festival, which I'm really looking forward to, it looks lovely, and it'll be nice to see Galton Blackiston again, I thought he was lovely when I did Market Kitchen with him a few years ago.

Then June 27 I'll be presenting to deli and food shop owners at Harrogate for the Guild of Fine Foods, something more of a trade show than a consumer one - BUT if you'd like your local shopkeeper to stock more great beer but are having trouble persuading them then this could be a good thing for them to come to!

And finally, for now, I'm also doing Wirral Food & Drink Festival (there's only the 2010 website at the moment but it'll give you the general gist) at which I believe I'll get to work with
Posted by Melissa Cole at 11:34 No comments:

Times They Are A-Changin'

It's quite scary to realise that you're involved in a polar shift in cultural mores but it would appear that myself, and people like Maverine Cole (Beer Beauty), Ros Shiel (Dea Latis) and all my international women colleagues are in exactly that position.


We are getting more women to try, and enjoy, beer.


This isn't a boast because there is a lot more to do (although it is something I'm proud of), but it's a fantastic start.


You only have to look at the Rake on Monday night, where the Project Venus beer was launched (I couldn't be there as I was involved in KaiWeCare - got £800 for a beer tasting too!), apparently the pub was heaving!


The beer was the result of a bunch of brewsters getting together and making a 4% beer with Pacific Gem & Citra hops, which apparently turned out so good two firkins were gone baby gone on the night! That's 144 pints in four hours case you're counting!


And of course, there's Barley's Angels, which is really taking off! (Sorry, I just can't help myself.) You can join our facebook group here and once I figure out why the re-direct has eaten the blog you'll be able to find it here www.barleysangels.co.uk (sorry it's a mess right now!).
Posted by Melissa Cole at 04:15 7 comments: