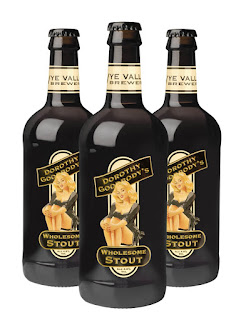 Now there's a headline I thought I'd never write, but then who would have thought a Government-funded agency would waste taxpayers' money staring up the skirt of a bottle label?

A representative of Alcohol Concern the – and I use the term loosely – think-tank on alcohol strategy, decided an efficient use of its time would be to complain about the picture of a buxom wench on Dorothy Goodbody’s Wholesome Stout claiming it was sexually suggestive and clearly commando - which I honestly can't see, even when it's been suggested to me.

But what I can see is the future, if this over-zealous Puritanical attitude is representative of government-funded agencies, and this future is one where we'll see the banning of:

Thank God the Portman Group, the UK’s drinks watchdog, has got some sort of perspective on reality and knocked back the complaint stating that the branding was merely ‘saucy’ and the claim that the woman in the picture wasn’t wearing any undergarments was a case of ‘the complainant’s imagination getting the better of them’.

But, it seems sense prevails more here than in the US where, for example, Rose de Gambrinus from Cantillon caused a bit of a stir in Maine because, shock horror, it has a rather pretty watercolour of a nude woman sitting on what looks like one of those naughty Greek god’s lap; and another state, Ohio I believe, has banned representations of Belgium’s famous statue the Manneken Pis from beer bottles too - because, and get this, it doesn't allow children to be represented on bottles of alcohol - I feel it necessary at this juncture to point out that the damn statue is over 400 years old!

And then there’s the French offering of la Biere sans Cullottes, which has a picture of a rather strapping lady with torn top and a bare breast (the result of being in a bloody great scrap by the look of it) rallying the troops for another charge in the name of la Révolution, which got censored in parts of the States too.

Which brings me to the subject of where’s the line? Well it’s a tough one and whilst I don’t find many beer bottle labels or pump clips offensive some people might - personally, I’m significantly more worried about the music videos I see on MTV these days!

But, I have to admit, that a very small minority of clips and labels are offensive, most of these are also just puerile, so I don’t buy those beers – I don’t care if they are the dog’s dangly bits I won’t spend my money on them.

But that's my decision - I don't need a quango squandering my taxes to direct me on this...

N.B. I did try to speak with Alcohol Concern on two occasions, but was unable to elicit a comment from this organisation.

Morning all, just a quick one to say there are two new beery social networking sites.

First is Democracy's Drink and the second is the Aleumenati - interesting move forward from the blog culture to facebook-esque networking sites.

Looking forward to see how these develop and may even set up one for a new business I'll be announcing later this week... watch this space!
Posted by Melissa Cole at 03:14 4 comments: