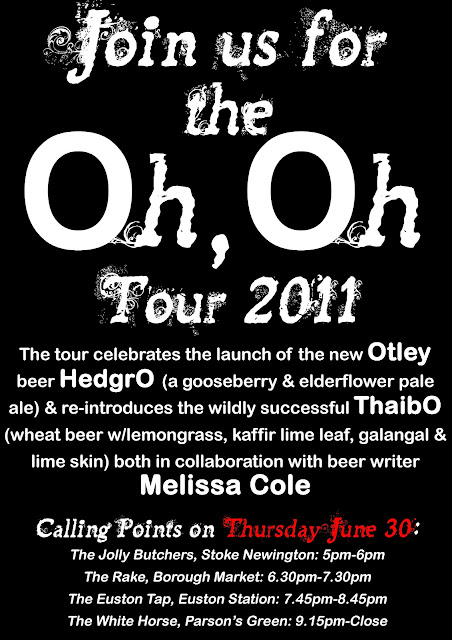 Thaibo is Back Baby! And this time it's got company!

Yep, you heard right, on June 30 we'll be kicking arse and being berry naughty as me and the Otley boys bounce around town showcasing our new collab brew, Hedgro (thank you Katie Hunt at CAMRA HQ for the name!) which is made with gooseberries and elderflower and, as mentioned a little bit enthusiastically earlier, Thaibo is back!

If you haven't tried this truly bonkers brew before it's a clear wheat beer made with lemongrass, kaffir lime leaf, lime skins and galangal - it's really delicious, I promise you : )

As I said, I'll have Nick and Matthew Otley with me, to talk about the beers and generally being charmingly Welsh!

and I probably am... but has anyone else noticed the resemblance between Garrett Oliver from Brooklyn Brewery & the Old Spice guy? Just me?

I'm a bit confused this morning (not that this is much different from most other mornings) over national newspapers and their attitudes to writing about beer.

Yesterday morning there was a 'top 10 bottled beers' slideshow online at the Independent; the headline is the world's best bottled beers but the choice is bizarre at best by that standard (Doom Bar for example, as far as I can remember, hasn't won any major world awards for at least five years) and some of the descriptions bear more than a passing resemblance to what's written on the websites.

And apart from the fact that, obviously, I earn my living from writing about beer what really bothers me is, as Pete Brown reported on his blog, there seems to be some sort of in-built prejudice against beer within the national press, or more to the point beer writers!

You can tell the disdain they have for beer because, instead of getting a specialist beer writer to select a range of award-winning beers, they got a freelance who used to be a political aide to Zac Goldsmith; now that's not to denigrate the chap, I'm sure he's a great professional and I have no problem with him saying yes to the commission, hell we've all done it.

What I don't understand is why the paper gave him the job!

If you care about beer, at all, please pull the nationals up in the comments sections and let's try and get them to give this fantastic, complex and exciting drink the respect it deserves.
Posted by Melissa Cole at 23:45 11 comments: