We Interrupt This (Travel) Programme AGAIN...

I'm not sure I've been impressed and then been so depressed by one organisation in such short order...

BrewDog has managed the admirable feat of giving with one hand and taking away with the other in such a tiny timespan, in fact so tiny I thought it was only possible for Governments to bend the time/space continuum in such a fashion!.


James Watt's comments re: cask ale in the Publican are really something special - and I presume the brewery will be halting all cask production forthwith to prove how right they are?


I also presume Pete Brown wonders why the hell he wrote the Cask Market Report and why anyone bothered to publicise the great news about the success of cask beer in the last 12 months in the face of such a diabolical overall beer market ...


As I said on Twitter (@melissacole if you're interested in following me) I am currently banging my head on the desk in between typing this!
Posted by Melissa Cole at 06:42 5 comments:

We Interrupt This (Travel) Programme... 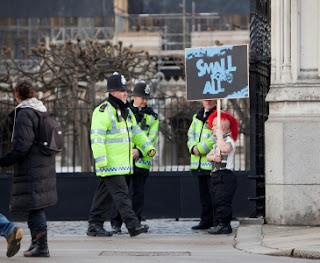 Just a quick break in my ramblings about my meanderings...


If you are quick to criticise, you should be quick to praise, and this is a brilliant bit of marketing by BrewDog to put a dwarf protesting the fact that we can't have 2/3 pint outside Parliament - amusing and has a very good point - as has the post by (I presume) James about the fact it's perceptions of beer that are the problem:

I've been told by several sources that the only reason we can't have 2/3 pint glasses is due to an odd piece of punctuation - seriously guys, we've got spell check these days, let's sort it out shall we?!
Posted by Melissa Cole at 05:13 3 comments:

Okay, so last post I promised to tell you a bit more about my recent meanderings across the globe so here's a bit more from my trip to the States.

As someone who firmly believes that beer & food are fantastic natural partners (in fact I'm currently making French onion soup with Fuller's Golden Pride, which will be served with Cantillon-washed cheese croutons & Sharp's Single Brew Reserve), so when beers & wings at Rock Bottom (which are very good) were upstaged by an invite to Mizuna, a fine dining establishment from the lovely Matt Stinchfield for a beer & food-matched dinner I couldn't resist.

The at-times whimsical menu was matched with beers from various breweries, including Stone, Great Divide, The Bruery and Moylan's, sometimes to good effect and sometimes not but the collaboration and effort that went into the evening is definitely something to build on and there were stand-out matches that were certainly a winner (see below).

It also gave me the opportunity to spend time chatting with the delightful Denise Jones from Moylan's, (whom I consequently had some good fun drinking with later in the week) and who makes great beer including an awesome Scotch Ale in the form of Kilt Lifter, very dry for the style but (in my humble opinion) fantastic for it – I also have her to thank for a very cool new t-shirt declaring my undying devotion to Humulus lupulus!

But anyway, there is a bit more of a point to this post than just taunting you with pictures of delicious food and it's about the UK restaurant scene and its failure to capitalise on beer, despite some bright spots!

I was mortified to hear about the recent experience of two high-end restaurant figures to whom I recommended a trip to Le Gavroche, because they want to give beer some serious thought and, given all the shouting about the beer & food matching that's gone on around the restaurant over the past few years, I couldn't think of a finer place.

Oh dear, according to my sources, the waiter, when asked about beer on the menu, repeatedly told them that there was a big brand lager and that was it, even when prodded that there was supposed to be a more extensive beer list - which says to me there's one of two problems here:
a) said beer list has been taken out
b) staff are insufficiently trained on beer because there isn't a real commitment to it

To bring it back to my experience at Mizuna, and the reason why I'm mentioning it, is because I'm just so over places that talk the talk but don't walk the walk and why I would like to sing the praises of the two young chefs in the kitchen who have a love for craft beer were given their head - which is the only way for beer & food matching to be given the creative attention it needs.

And whilst they freely admitted some things didn't work, by god they were going to be polishing their beer & food-matching skills until they were right - you could see that burning out of them as they talked.

Anyway, that rant over, I hope to have some new restaurant news for you this week about where to go to get great grub & good brews and I'll also be posting some further musings from my wanderings, and keep an eye on Twitter for my Amsterdam adventures at the end of the week - I promise all pictures will be suitable for workplace viewing!

But before I go, here's the menu as I promised, I've put in bold the beers I think worked with the dish: 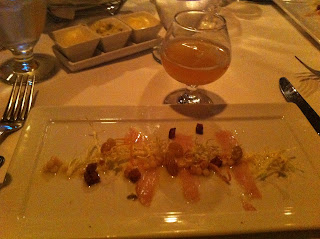 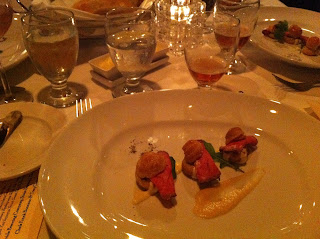 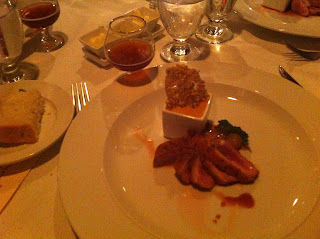 Autumn Maple Ale, The Bruery (CA)
Stone Sublimely Self-Righteous Ale, Stone Brewery (CA)
(sorry but neither beer was subtle enough for this dish & just dominated)
Fourth
Corned Beef & Cabbage
(house-cured short rib w/butter melted cabbage)
I can't find the pic for this, it's possible I ate it before I could take a snap - it was AMAZING! (thanks to Matt for having more restraint than greedy me!) 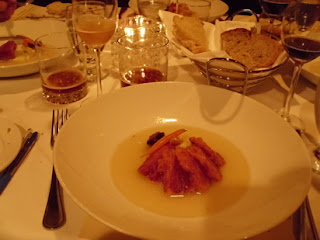 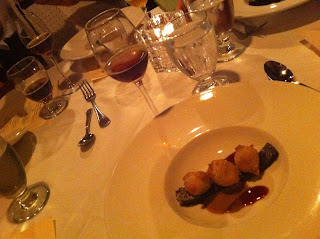 Well, I’m sorry I’ve been missing but I can only cite the fact that my life has gone mental! In a great way I must confess but that means I have to mega-apologise for not blogging for so long – I still love you all I promise!
So, why have I been missing? Well, first things first, I’ve got a book deal! Very excited to say the least! It has been a great process with the wonderful people at Anova refining the concept and I think we’ve hit on a fresh formula, which will make it accessible for the idly curious and the uber-interested alike (fingers crossed!!). Out towards the end of next year with luck!

But, I’m sure you’re not going to let me get away with just that as an excuse! So what else have been up to?

Well, I’ve been travelling a heck of a lot, in the past six weeks I’ve been in Belgium, Bristol, Czech Republic and the People’s Republic of Cornwall! But let me take you back to September first...

Excitingly I was back in the States judging at the Great American Beer Festival and it was just as much of a blast as it was last year, if not more, and you can see the results here but, very quickly, I’d like to make special mention for Jeff Bagby & his crew at the Carlsbad Pizza Port for winning medal after medal and taking large brewpub of the year – he’s an absolute sweetheart, his fiancée Dande is a honey - I can’t think of nicer people to win the award.

But aside from adoring Jeff, what I can't reiterate enough is his talent as a brewer. Just one example of this is that I judged the medal round of English IPAs and I was adamant that his (which I didn't know at the time I promise, it's a blind tasting!), was head and shoulders the best beer and the only one to really make the Fuggles & Goldings shine the way English brewers do - in fact I stayed at the judging table a few additional minutes with an extra glass in my hand courtesy of our lovely table steward! That's how highly I rated it.

It was also grand to see Noah from the San Clemente branch of this modest brewpub company win small brewpub of the year too – he's a star of the future in my humble opinion, and is certainly a hit with the beer ladeez across the pond!
﻿
﻿﻿


It was also gratifying to see medals for brewers I not only like but seriously respect as well, like Tomme Arthur from Lost Abbey, Tonya Cornett from Bend Brewing, Mitch Steele from Stone, Matt from Firestone Walker, Wayne from Cigar City, Jeremy at Schmaltz (who’s just written a book, which I haven’t had time to read yet), Greg Hall at Goose Island, Jeff at Alaskan, Nick, Barnaby & the crew at Three Floyds, Larry at Iron Hill and Brian from Great Divide (hope I didn’t miss anyone I know – got this sneaking suspicion I have though, apologies!).
The festival is awesome - although the pretzel necklaces & multi-coloured beads leave me a bit confused - it’s busy but not cramped, there are water stations everywhere, there’s a great buzz about it and I do quite like the ounce servings you get - sometimes I do crave a bit more of the beers that I really take a liking to, but it does also mean you don’t procrastinate in one place and it encourages you to try as many different ones as possible.
On a personal note I'd just like to send thanks to all at the Brewer’s Association and most especially Chris Swersey, as ever, this is the slickest judging event I’ve ever attended, you are an organisational genius, and I may make you regret that fishing invitation if I get the time next time I’m over! And thanks to all the volunteers, you are truly smiley happy people, who do all the real hard work whilst we sit on our butts & drink great beer!

Also, thanks to my fellow judges, you were all a collegiate pleasure to judge with and also to my awesome, awesome roomy Jessica Heidrich, who on the final night put up with my dumbass capability to drunkenly demagnetise my key card and opened the door in wee hours three times in a row, and made a trip to the mall and hugely entertaining process - you rule lady!
But, this is the first instalment what have you got to come? Well, it was a trip of high amusement, high cuisine and even higher altitude drinking - not to mention a Goldilocks-esque story of 'who's in my bed?!' to come (not involving me I hasten to add)

Tune in for more, later in the week.

p.s. off to try the Grand Ridge beers at the White Horse, Parsons Green this evening, unless you've been to Australia it's unlikely you'll have tried these before so this is ticker/beer geek heaven baby!
Posted by Melissa Cole at 07:35 5 comments: