It'll Be All-Bite on the Night! 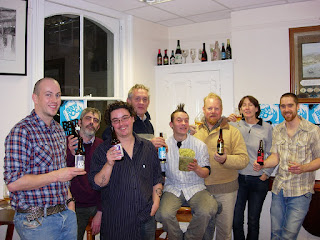 Sorry for the terrible headline but I'm trying very hard to keep it together right now, I've got half a kitchen, tradesmen everywhere and more dust than half the Mojave desert! New central heating system, who knew what a palaver it would be?!

Anyway, that's not the point of this post, I promised more on the BrewDog tasting events and here it is...

We were virtually sold out for both sessions and the lads rocked the house with their mix of wit and beery wisdom. Lucky punters got to taste 10 beers including a couple of particularly special recipes.

The penultimate beer in the tasting was the specially name Rake Raspberry Imperial Stout created from a 10% imperial stout aged in a Smokehead whisky cask with 25kgs of fresh raspberries and the finale was Zephyr - a 13% India Pale Ale (IPA) that has been in a grain whisky cask for 18 months with 30kgs of fresh strawberries - and if you want to try them I suggest you hurry down to the Rake because they are apparently both selling like hot cakes.

For my money the Zephyr is exquisite, the interplay of strawberries and strong, almost vinous, aged beer is incredible. There's a whole host of tropical fruit, coconut and lime on the nose, which is then added to with rich, warming white port-like flavours and a slight dry finish to stop it being too sickly sweet. But I can't wait to try the raspberry stout once it's had a chance to age a bit.

What was also really cool was to compare the keg and cask Punk IPA, the brewery's best-seller. It caused a lot of debate between the 10-or-so of us that were sampling it after the official tasting; I preferred the cask for its big fruity/bitter finish and others preferred the slightly less aggressive keg product - but we all agreed that whatever form it came in, it's a darn good beer.

It was also such a pleasure to finally meet Martin, having communicated with him so much over the last six months or so, and great to have a chance to catch up with James outside the pressure cooker environment of a trade show. Thanks also to Fraser whose mad rye bread slicing skills were a godsend!

But the best part for me was the eclectic mix of people who came to the tastings; from die-hard beer fans and familiar faces, to a father & son, two women barely in their 20s to a middle-aged couple who were clearly happily overwhelmed with the veritable array of flavours on offer.

This is what meet the brewer sessions should be all about - and we've got another one coming up in January, so watch this space.

This post is a write up on a tasting at lovebeer@borough, which I am a partner in.
Posted by Melissa Cole at 07:05

okay, just 'cause of this I am going to buy a bottle of that Punk IPA stuff...I'm going to buy it blindfolded, drive home using the power of the force then grope round for a marker pen and scribble over all the nonesense on the label before finally removing the blinfold and drinking it!

Perhaps a brown paper bag may lead to less 'Madman Drives Blinfolded Through City Centre' headlines in the Echo & Post?

And less deadness for you?!

I'd be very surprised if you didn't like though - I hope after all the bother you're going to you do anyway!!

But surely drinking from a brown paper bag might be seen as a wee bit...*hmm, how do I put this*...trampy.

Okay, how about putting it in one of those Anya Hindmarch 'I am not a plastic bag' bags if you're going to be that image conscious!!!!

I'm just trying to ensure you're not depriving yourself a top taste sensation! Honestly, miserable Blues, I get enough of that at home without you starting! ; )

What a cruel, cruel day.

Sadly we missed the Meet the Brewer session but were delighted to find almost all of the cask BrewDog stuff still available the following Friday, including the exclusives: the sublime Rake Raspberry Smokehead and the huge-hitting Zephyr. Everything these guys touch seems to turn to gold!

So impressed we were, that we abandoned our plans to move on to the Pig's Ear fest and settled in to sample the rest of the cask range and a couple of bottles too. The silky smooth Paradox Grain was another real highlight for me.

Look forward to hearing who January's featured brewer will be!

Thansk for bringing them and thir beers down to the Rake. I missed the tasting, but was lucky enough to taste the range a few days later. The Rake Raspberry was divine - I look forward to the bottled version next year!