BEER BITES BACK AT BOROUGH 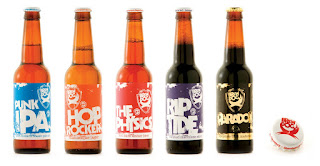 lovebeer@borough and top Scottish beer producer BrewDog have joined forces for a day of tastings on November 29 to herald the start of BrewDog week at the Rake bar and sister market stall Utobeer.
Beers will include such incredible concoctions as Zephyr - a 13% India Pale Ale (IPA) that has been in a grain whisky cask for 18 months with 30kgs of fresh strawberries - and the specially name Rake Raspberry Imperial Stout created from a 10% imperial stout aged in a Smokehead whisky cask with 25kgs of fresh raspberries.
But, don’t be scared, we’ll only be serving them in sensible tasting measures – alongside a selection of other BrewDog beers such as the much-loved Punk IPA, Hop Rocker, The Physics and Rip Tide.
Tickets are 30 quid and available from the Rake and Utobeer on Borough Market or by emailing me melissa@love-beer.co.uk

This post promotes a tasting at lovebeer@borough, which I am a partner in.
Posted by Melissa Cole at 12:02

I'd love to be there, but I'll only arrive in London the next day. Hope there is some of the good stuff left at the Rake then!

There certainly will be! Enjoy.

I've been eyeing the bottles of Punk IPA curiously for a while now, usually I'd try new ales but the blurb puts me off, you have to beware about something that's trying THAT hard and putting that much effort into cultivating a supposed anti-brand...a case of "content-over-image over content"? Does that make sense?

I can see where you're coming from but the beers really do speak for themselves - I presume however you won't be trekking down from Liverpool for the pleasure? Been at Goodison a couple of times myself recently (other half is one of yours, sits in the Joe Mercer) - the United game which was a goody (apart from Ronaldo's embarassing histrionics) and the Fulham, boring and attritional!

Yeah that Utd game was a brilliant example of a 1-1 win....but I suppose you can use the same logic to categorise the Fulham game as a 0-1 defeat.

Can I take it as read you don't indulge in plastic glasses of tepid Chang at half time.

We drink in the Black Horse on Country Road which at least allows for a pint of Greene King. Immediately after the Utd game, however, we barrelled to Waterloo Rugby Club for some Deuchars IPA.

God no! Chang is not on my list of beers to try again in a hurry.

Unless you are in Thailand of course...It was in the 'land of smiles' that I discovered the delights of the "Changover" *shudders*