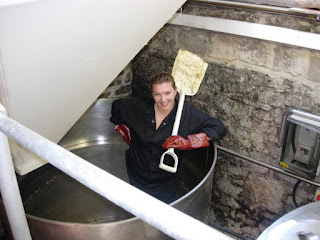 I'm coming to you live from the Thornbridge brewhouse with the breaking news that I've just made my very first beer (with a little bit of help from my friends admittedly).

The reason I'm here is that I've decided that, for the next year, I'm going to try and brew at a different brewery every month - and head brewer Stefano very bravely offered his help for my first effort.

Called Heron, it will be a 3.8%ABV pale golden ale with four different types of hops - including two I've never come across before - and I can't tell you how excited I am!

The guys had already settled on a grist mix of low colour Maris Otter & Munich malts and it was my job to choose the hops to create a sessionable ale with interesting, but very drinkable, characteristics and, my god, did I have fun doing that.
Seriously, the Thornbridge hop store is like a beer-nerd's candy shop - and they gave me the key! (Possibly a bit like giving a monkey the key to the banana plantation but, hell, I wasn't complaining).
Early in boil we added equal measures of Bodicea and Vanguard and then later on we added Susan, which has a lovely fresh apple characteristic, and a smaller amount of Glacier, which has an amazing curly leaf parsley aroma with a real minerally/minty finish - which is a pretty exciting flavour combination to play around with. 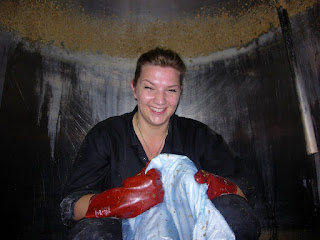 We also added a tiny amount of the bittering hops after the boil had gone off just for an added extra bit of smooth bitterness and aroma which, if the green beer is anything to go by, will make for a really smooth, refreshing bitterness that doesn't linger at the back of the throat - fingers crossed anyway!
Much to everyone's amusement, except possibly mine by the time I'd finished cleaning the copper, I insisted on doing all donkey work as well as the sexy stuff - because it's just not brewing if there's not some blood, sweat and tears involved!
All right, no blood was involved but as you can see from the above photo there was a hell of a lot sweat, some tears and have I got some bruises in funny places from climbing in and out of the mash tun and copper?!
But, bruises on my bum aside, I've had an exceptional time at Thornbridge, the hospitality I've been shown has been outstanding and the team here are, quite simply, lovely to work with and it was also a momentous day to be brewing as I was there when the deal for the new brewhouse was signed - so congratulations guys.
And finally, special thanks go to hugely entertaining Kelly & his lovely girlfriend Cat who beered and dined me on my first night at the delightful Coach & Horses pub in Dronfield.
To Matt (pictured below right trying the hopped wort of our beer) - thanks for putting up with me getting over- 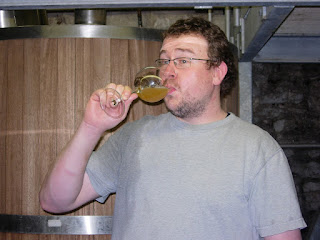 enthusiastic with the shovel and throwing hot malt in your face and then adding insult to injury by spraying you with very hot water! But most of all thanks for sharing my novice's enthusiasm for the whole process and for looking after me all day.
And to Stefano - thanks for putting up with multiple date changes, allowing me to invade your brewery and for stopping the car to show me the herons on the lake, thus providing the inspiration for the beer's name.
I'm quite serious when I say it's been a remarkably fulfilling, and incredibly educational, experience, I can't wait for the next stop on my brewery tour - and if you get a chance to try the beer please do let me know what you think. 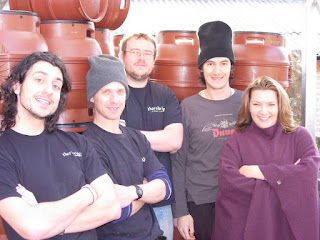 The gang's all here: Kelly, Dave, Matt, Stefano & me (just in case all the long hair fooled you!).
Posted by Melissa Cole at 01:55

It was fantastic, I honestly woke up disappointed not to be donning a boiler suit this morning!

Will they be sending your beer to their usual outlets? We've been getting loads of different Thornbridge stuff at the Grove in Huddersfield recently so will keep a look out. Great post!

Hiya Will,
I honestly don't know where it will be stocked but I'm sure if you ask the landlord at the Grove to ask about it I'm sure they'll sell him some!