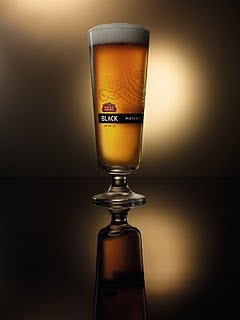 It was with interest that I read Pete Brown's blog post here  about the new launch from InBev Stella Black.

Whilst I agree with a lot of his points, most especially naming a lager 'black' and it being golden when the UK market has gotten used to the concept of dark lagers, I wanted to get more information about the beer itself before I wrote anything.

The reason for this being is that I promised myself earlier this year that I wasn't going to knee-jerk react to products just because they came from camps whose actions I've disapproved of in the past.

Anyway, my pathetic personal angst aside, the first point I find interesting is it's stated as being a full grain mash. Now, there have been a lot of allegations (whether or true or false I've never been able to get an answer officially) that a lot of syrups are used in the production of mainstream Stella, so to hear Black is a full grain mash is certainly a great step forward if the aforementioned allegations are true.

The grain bill, if you're interested, is malted barley, raw barley and maize - don't know what the hops are but I'm taking a punt they are Saaz, as that's what's used in the original - and provided they haven't gone overboard with the maize it could be a good start.

Then, and here is something I was quite pleasantly surprised by, they informed me they are also using orange peel and coriander in the beer and apparently, according to ABInBev's press office, I'm the only person to know this at the moment because I'm the only person who's asked! How depressing is that?!

Now, please don't think this is me bigging myself up but don't you think this is a question that should have been asked by others by now?! (I'm not including Pete on this BTW, he was commenting on how he thinks the beer's market position falls between two stools and I think he's right given the brand's 4.8% ABV, Stella 4 & its other 4-something per cent stable mates like Beck's Vier.)

However, I'm also totally exasperated that instead of using a whole world of pointless hyperbole - like calling it a 'premium plus' experience - they didn't focus on what makes it so different, which really is PR 101 and something that they really need to focus on communicating if they want to try and claw back some sort of credibility.

All that aside, however, I actually do want to try this because it does look like they've had a stab at creating a more complex drinking experience but the proof, as they say, is in the pudding and as they haven't yet confirmed where the limited number of outlets (500) are they are placing it yet, I will have to wait.

I completely appreciate that this is the kind of posting that's going to make me unpopular in some camps - apart from perhaps with Cooking Lager! - but, hell, what's new there?

So, a black day for mainstream lager or a ray of light? I'll let you know when I've managed to try some...
Posted by Melissa Cole at 03:13

Good on you for finding out some product information! It's amazing that they didn't put anything tangible whatsoever on the press release.

For the record, I did ask for more details about the brew and all I got was that it was a lager rathert than an ale! I was particularly interested in the fact that it's "matured for longer". I asked InBev's press office how long it was matured for over a week ago. I've received no reply.

I don't think you'd be knee-jerking if you concluded that they really don't want us to know too much about the specifics of the beer.

I totally understand your frustrations and Laura in the ABInbev press office did take a while to get back but she was waiting for info from Belgium, which we all know can be a looooonnngg wait!

I'm a little frustrated that they won't release actual maturation times, but as they've put out in the ether that it's double the normal time it will show exactly how long bog-standard is matured for and I'm guessing that's a can of worms they soooo don't want opened.

It's such a shame that they are such a PR fail in so many ways, but I guess that's what happens when you lose the woman who knew the industry so well, or should I say when your b2b agency 'loses' her... everyone who knows the industry knows what I'm talking about here!!!!

I'm also guessing this will take me out of the frame for judging the Stella Draught Masters later this year - oh well!

Presumably this is a different beer to the one whose publicity campaign stirred Jeff up? They'd have to send someone around with a Sharpie and stick a big asterisk on all the advertising & add fine print about coriander & orange peel.

It's a shame it's called "Stella Black" when it's not a dark lager, and it's also a shame that this'll probably result in a lorra people at tube stations humming "What's it all about, Alfie?" to themselves without consciously realising why.

The use of maize would seem to me to be in either corn grits form (polenta basically), in flaked form, or as hydrolysed corn syrup. If it is the latter it isn't a full grain mash, so corn grits or flaked maize it must be.

Flaked maize is already cooked so doesn't need a full cereal mash before putting it in the mash tun, so I'd guess that it'll be flaked maize likely as not. Either way, apart from a slight corn flavour, maize has no real brewing advantage other than relative cheapness,so what's the point? (Mind you I am stretching my brewing knowledge a fair bit here)

The other ingredients you mention are interesting, so we'll have to wait and see. Still a daft name though.

Heh, I'm as cynical as the rest of you guys. Seems to me marketing is a way of getting people to pay more for the same thing. Nowt wrong with regular 20p a bottle Stella.

Well excuse the cynical tone of what follows... ;o)

All-grain grist is erm, not necessarily a guarantee of taste. Just look at german supermarket lagers. All-malt, but mostly ranging from uneven to rather awful. ;o)
Indeed dodging adjuncts is a good thing as a matter of principle, but it is no guarantee per se of a characterful beer.

Coriander and orange peel ? That would certainly be an interesting thing to add in a malt-accented pale lager.
But coriander is also notorious for being very useful for hiding minor taste faults in beer. Therefore some people in beer consumer circles - including yours truly - tend to be wary of any beer, Belgina or else, with too powerful a coriander note...
Bit of a activist's knee-jerk "what are they trying to hide here ?" reaction, I'll readily admit. ;o)

Anyway, let's wait and see what actually comes in the glass. You never know, miracles happen. Rarely, granted, but they do.

Historically (i.e. from reading Maureen Ogle's book) maize is in 'lager' as a cheap replacement for imported barley. That's in the US, so why do AB-I need to use it in a beer brewed in Europe for this market?

And why add adjuncts more commonly seen in wits or saisons? This is supposed to be 'lager', no?

They aren't just a 'PR fail', Melissa... they could give a fuck about beer, and this is another punt into the unknown with a new 'brand extension'. No real brewer thinks like that, so why should any journalist or drinker or whoever buy into it?

@Sid, IIRC, Maureen Ogle's book makes the point that it was not necessarily as simple as a cost-cutting measure, but possibly a technical one: European two-row barley, low in protein being hard to find in 19th-Century America, US brewers had to turn to local 6-row barley that was notably higher in protein, threw a serious chill haze and gave the beer a thicker mouthfeel.
In order to come closer to European imported lager beers, they turned to replacing 6-row barley with starch sources almost devoid of proteins. Those were at first rice (which wasn't necessarily that cheap either), and then maize, as a substitute to rice, with the added difficulty that maize contains some fat.

@Sid I didn't condone it, but I'm not going to slam it until I've tried it, which I think is significantly more important in terms of journalism!

Maybe no one can try it yet because it's still 'maturing'?

It's good that a beer journalist is reviewing an InBev product with an open mind.

What I find quite appalling is the number of beer critics who routinely slag off Stella Artois -- but who never admit to drinking it in the last 20 years (if at all).

The reason why Stella is the biggest seller is that it's the best mass market premium lager in terms of taste and quality -- it may have been dumbed down with maize recently but it's not too dissimilar from when it was advertised as 'reassuringly expensive'.

Any serious beer writer should do a tasting of mass market beers at least once a year so they know their enemy and not make bigoted, prejudiced comments out of ignorance.

And at least the product is consistent. I'm a great lover of real ale and very rarely drink fizz but when temperatures are at 30C, as they are in the south at the moment, there's a hell of a lot of pubs that will struggle to keep their real ale from spoiling -- and most will happily serve rancid beer.

I just found this in a bar in Glasgow today. I'm a real ale drinker normally - but no expert. Usually the choice in bars is truly dire. I found this a refreshing change to boring lagers. Yes it was chilled and gassed but at least it had some complexity to the flavour! What happened between July and November I don't know as this is the first I've seen it. Faced with the usual array of shiny taps and gassy flavoured water, I'd look for this - I'd might even pass up on a real ale omg

had it in the Marquis of Granby on Percy St, london. Good tasting beer but it provided me and my drinking partner with an awful hangover when neither of us drank excessively.

Hi anonymous, the main reason for this is the cheap-arse way they brew it, pushing up fermentation temperatures and slashing maturation times, this leaves you with a lot of acetaldehyde, which is very toxic and is the main component in any hangover! Science bit over! : )