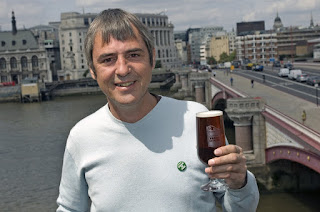 This is a bit of a random collection of things that I've been meaning to put up for a while and have spectacularly failed to do, for which I apologise.

First up is the Publican's Proud of Pubs bitter - bloody drinkable, for a very good campaign and brewed under the Morrisey Fox label.

Now I know a lot of you probably saw the C4 programme that came out and, at the risk of ticking off an employer, I have to say having met Mr Morrisey several times in various places and having known Richard for a few years, they were badly portrayed.

Neil (I can call him that now you know!) is genuinely passionate about beer, brewing and the British pub and I really like the guy's take on things.

"If the British pub disappeared tomorrow there would absolute public uproar, so why don't more people support the ones they've got more today?

"We're a nation of pub-goers, it's partly what defines us, and more people should be proud of that and show appreciation for beer & pubs, I get really annoyed when it's all bad news about pubs all the time when actually the really good ones are still thriving."

Can't argue with a word of that... Proud of Pubs week runs from July 11-19 so ask your local to stock Proud of Pubs bitter, it's available through Waverley TBS.

Spicy Little Number
Anyway, onto the next bit, keep an eye out for Sharp's new Honey Spiced Wheat which is coming to a specialist beer retailer near you soon - it's absolutely lush. The honey is balanced out with the creaminess of the wheat and the spice is subtle but punchy enough to let you know it's there, an altogether cracking beer.

Gin Fling
Being the drinks junkie that I am I always like to throw in something non-beery from time-to-time and I love the new Hendricks campaign to use mis-shapen fruit and veg more.

The Hendrick's Charter for the Legalisation of Forgotten Fruits plays on the fact that the EU late last year tore up the utterly ridiculous piece of legislation that prevented 'ugly' fruits to go on sale (think bananas that only curved a certain degree etc.).

For those of you who haven't tried Hendrick's yet, it's a seriously floral, refreshing and delicious gin with cucumber and rose petals as just two of its 29 botanicals.
Posted by Melissa Cole at 02:28

I'm sure he is a decent chap, though not the sort you'd introduce to your missus, by all accounts. Did you ask why if he's so proud of pubs he ripped up a perfectly decent boozer and turned it into a gastropub? Maybe the man Morrisey is more proud of publicity for his grog, as nice a swig as it is.

Your right about the pubs. I work for Daleside brewery in Harrogate and as you may know Harrogate is home to some quality pubs which at the moment are far from suffering. Everyone with good knowlage in the buisness knows its the pubs with the 70's/80's mentality of restricting customer choice are dropping first.

@Cooking Lager - can't comment on the Punch Bowl as I haven't been, although I know someone who lives locally who frequents it a lot and likes it, I can only write as I find and the beer is very sessionable.

@Rob - obviously there are always going to be exceptions to the rule but I agree with you that, whilst I'm terribly sorry for the people involved, a lot of the pubs closing are victims of their own inability to move with the times.

I don't mean that they should have reincarnated themselves as karaoke bars, then alcopop havens, then lager bars and so on - what I will say is that simply cleanliness, a food offering that doesn't need to go ding, decent beer, wine & spirits and a smile go a hell of a long way.

The biggest criticism I have of old fashioned boozers is their failure to notice that, since the smoking ban came in, eau de urinal block is not an enticing scent!

Interesting that the press shot of Neil Morrissey seems to have been take at Doggett's Coat and Badge, one of the worst pubs in London.

Keighley (my home town) has a thriving pub scene. A lot of the pubs are pretty old fashioned but stick to a core product that they do very well - outstanding quality beer, especially in the Timothy Taylor houses. It's not uncommon to see clubbers on their way to Leeds drop by the Boltmakers Arms (home of the definitive pint of Landlord) for a swift 'un before their train.

I can think of only three or four recent pub closures in the Keighley. While it's always sad when a place shuts for good, none of these were really worth visiting and were all, frankly, a bit rough. I understand that at least two of the pubs are mothballed, so might reopen as places worth a look. What is very sad is a rural pub closing through no fault of the owners. Use 'em or lose 'em.

It's been a while since I have had gin, although the hendrix gin sounds delicious. I checked out the website. I recently had a fantastic IPA (Schlafly's Export IPA)that had the most pronounced Gin flavor. It really set the beer apart.

@TIW - both Morrisey & myself were appalled at the state of the deck, overflowing ashtrays, crap all over the place, dirty glasses left out overnight; I've yet to have an impressive visit to this pub I must admit.

apologies if you received a spamming message from this thread, I've now deleted it.