The curtain has fallen on the GABF but the winners were announced yesterday and I've listed them below or you can download a pdf here. 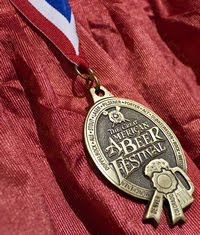 As it's a blind judging we didn't know which beers had won until everyone else did, which was actually quite nerve-wracking as the crowd watching are certainly very vociferous about whether they approve of the judges choices or not!

The stand-out beer for me that I judged, in terms of innovation, was the winner of the gold category in wood-aged beers, the Humidor Series IPA, Cigar City Brewing, Tampa, FL. It is aged on the wood of cigar boxes, which is called cigar cedar but is actually from the mahogony family, and the spice and aroma it imparts to the beer is absolutely incredible. The base beer IPA itself was technically flawless and the pepper, sandalwood, vanilla, cinnamon, cedar, leather and tobacco notes that poured off it were more akin to a rum descriptor than a beer but still incredible nonetheless.

After my aforementioned dinner at the Samba Rooms (my empanada starter got shared with the whole table as four of them arrived about two thirds the size of a Cornish pasty!) we were wavering about whether to go back to the Falling Rock as it threatened to be a bit of a scrum and we were feeling a little fatigued - well I'm so pleased that we didn't wimp out because it was a brilliant night!

I managed to get myself wedged against the outside bar where the awesome Bill took very good care of me, once I'd finished my very refreshing starter for 10 of Dale's Pale Ale from Oskar Blues (the first people to start putting craft beer in cans by all accounts) I moved onto the Sierra Nevada Harvest, which was as spectacular as you'd expect it to be, wet-hopped, fresh and balanced, then onto the New Belgium Tart Lychee - wow!

I've really begun to change my mind about fruit beers recently and the ones that they've got out here are fascinating; balanced, sour, sweet, a little mineral salt on the palate as a general too. I also got treated to a little Lost Abbey Sinner's Reserve as well, which was very special. A nice sour nose with mocha and chocolate notes leads through to a slightly sour raspberry and charred wood middle and ends on a rich prune note - very rich yet drinkable. And there was an obligatory Pliny the Elder thrown in there too!

I also met a whole host of fabulous people, including Daniel Del Grande, the brewer of the aforementioned Honey Basil Wheat, which I accidentally in a slightly fuzzy state called ale in my previous post (apologies), Bubba from Bear Republic, Chris Fisher from Newport, Ron from Cascade and a whole host of other people, apologies if I haven't name-checked you!

I am back off to Falling Rock on the way to the airport today, and if I am invited to come back next year (finger's so tightly crossed they are creaking) there are some things that I will know.

Firstly, that I'm going to have the pleasure of meeting some amazing people, secondly, that I will drink some truly rocking beers and thirdly that long white trousers which skirt the ground are a very, very bad idea to wear to Falling Rock on the last night of GABF - they are now not white trousers four inches up the leg, nearly crack when folded and have stunk my room out with stale beer despite being in a plastic bag!!!

But, do you know what? I couldn't care less!

Why wait for 2010 GABF? World Beer Cup in Chicago takes lots of judges.

It would be awfully presumptuous of me to think they'd want me back!

It was great to meet you in person Stan x