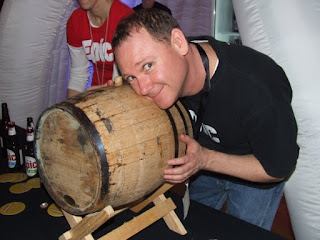 Just a little update on my weird world - the Epic Armaggedon IPA that has been on the NZ Inter-Island ferry in barrels named after myself and Pete Brown have finally been tapped!

Pete & Melissa were opened to the public at Beervana, a beer fest in Wellington that was held over the weekend, and apparently we both travelled very well.

Anyway, if you'd like to see a bit more then take a look at this Youtube clip...

p.s. at least he's not assaulting me in this picture, unlike the last one!
Posted by Melissa Cole at 02:24

so funny, i liked :D

You will be pleased to know that you tasted alot better than Pete did. More rounded , with a big tropical fruit pinapple note. Pete picked up more oak and was a touch harsher.