Tonight I'm launching a beer I brewed with Jonny Park of Tap East and my dad for his 70th birthday.

This, in case you are wondering, is what he looked like when he was about five years old - tie askew and clearly plotting something naughty for when he gets out of school.

And, if I'm really honest, I don't think he's changed much mentality-wise, he's just got better at getting away with stuff as he's got older!

I may also resemble this remark...

However, it would be wrong to say I'm just like my dad, I'm not, I am, without doubt, the sum of my mum and dad's personalities, with a little of 'just me' in there too.

I have my mum's blunt pragmatism, 'don't give a shit what you think' attitude and her moves on the dance floor.

The best way I can explain why I've picked out those three things as most resembling my mum, is also a story of one the funniest things I have EVER seen.

Let me set the scene: my bestie Christine has a fabulous loft apartment in Clerkenwell and it's the perfect party venue and she kindly offered it to me for my 30th birthday party, which was ace.

So, there's about 40 of us having a great time apart form one person the girlfriend of a (now former) friend who I had explicitly asked him not to bring... nobody liked her as she was the judgiest person ev-ah!

Anyway, mum & I were dancing away happily to my great mate Dave VJ spinning the tunes but he couldn't play music loud enough to drown out her chuntering away about how we were dancing and how 'inappropriate it was for a woman of Bernice's age' and so on and so on.

So, after two songs of this behaviour my mum, god love her, had had quite enough and straight-up slut dropped - waving her booty right in front of this judgy baggage's face!!! Stood up and said: "No, that's probably a little inappropriate for a woman my age but I don't give a shit what you think" before sashaying her way back over to where I was standing with my jaw on the floor before bursting into uncontrollable howls of glee at her actions.

Honest to god, in my eyes that evening, my mum wore a cape that fluttered in the non-existent wind as she stood there with her hands on her hips like a dance floor-owning, bitch-slapping goddess.

That's what I get from my mum and I love that side of me, and her.

However, there's no doubt I have more similarities to my dad as I grow older - which my mum & sister would tell you is not necessarily a good thing!

We go fishing together, we like to work with our hands, we are both story tellers (although I cannot tell jokes and my dad excels at it) and if you leave us alone together for long enough we're almost bound to get in trouble/break something/do something silly that will piss my mum off/be reduced to uncontrollable giggles at a joke only we understand... or all the above.

It was my dad that taught me that being selfish isn't necessarily a bad thing, as long as you don't hurt other people along the way. By 'selfish' I mean doing what you want to do, to achieve what you want to achieve or experience new things and gain new skills in life.

He was also my role model for striking out on my own and offered lots of advice and support to me as I did so.

However, the thing I love most is spending time on the river bank with him, nothing does my soul as much good as hanging out with my dad for the day, trying to catch trout and setting the world to rights.

But brewing this beer came a close second.

Seeing dad recognise how much hard work and expertise goes into a brew, seeing me chatting with a brewer about how we were going to progress through the day, what we were looking to achieve and then getting stuck in was brilliant.

Not so keen on the hurry up and wait aspect (he's also where I get my notorious lack of patience for things that aren't engaging me from) it's probably the most engaged I've seen him in a project that doesn't involve woodwork, springer spaniels, sailing or fishing.

And it's the personal nature of the brew that I'm thrilled with too - Commercial Road is named after the road in the East End of London that connected the East & West Indies Docks.

It's also happens to be where my grandparents lived until their house was bombed in WWII and they ended up in Englefield Green in Surrey, (a wonderland for naughty little boys to grow up, with Windsor Great Park just down the road!).

So, between the connection to my dad's parents and the fact that the road joined the docks where IPA was shipped to the Indies, it seemed only natural to brew an English-style IPA. 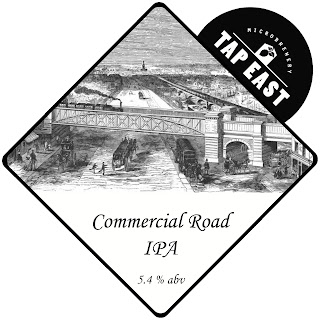 However, right at this point in time I am more scared about a collab launch than I've ever been.
I haven't been able to try it yet and I can only hope that we've created something that's half as memorable as the day of brewing it and that the fun we had making the beer somehow comes through.

Whatever the outcome, it's a day that I'll never forget and one I hope was a nice present for my dad, who isn't in the least bit 70, he's still that tie-askew, wide-eyed-at-the-world, total hooligan you saw in that picture above and in that, and so many other things, he will always be my role model.

Quick thank you to Jim and the guys at Simply Hops, without me even asking, donated the hops for the day - we used Target for bittering and three additions of Warrior Queen and Endeavour and a dry hop of both too.

Big love goes to Jonny Park at Tap East who was unstinting with his time, knowledge and ability to cover me in wort on the day! And thanks to Mike Hill & Richard Dinwoodie for allowing us to go and play on the kit.