There are times when you just have to treat yourself and this evening is one of them. 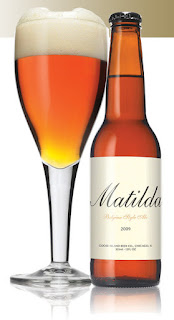 I've had my niece for three days and I have to say she has been an absolute dream - utterly sweet, considerate and darling with a creative side that is deeply endearing.

But after a really long day and a pretty lengthy gig on LBC coming up I just felt like spoiling myself, so I decided to crack open one of my Orval-inspired 2008 Goose Island Matildas and boy, am I feeling treated.

The nose is a cornupcopia of soft citrus, barley sugar, slight obvious alcohol and a little soft creaminess, with an almost ephemeral spicy note one the end and just when you think that the nose is heavenly then you taste it - wow!

The immediate hit is orange marmalade but then the subtleties start creeping in; the first hit is where you find out where that ephemeral spiciness is coming  from, and it's a really warming szechuan pepper, then the fresher overtones start to arrive which stop this becoming too cloyingly marmalade sweet.

These little fresh spikes consist of that metallic hit of curly parsley, the smell of thyme being crushed between your fingers and the merest hint of spearmint.

Bring this all together with a grapefruit sherbet sharpness and a final bitter, bitter chocolate end and I have to say that this is one of the most refined, exciting, complex and elegant beers I've had in a very, very long time.

Oh, and did I say beer singular - I'm afraid since I started typing this it's become beers, plural!

I had a beery weekend in Chicago last autumn and I visited the Goose Island Clybourn brewpub in Chicago. Great beer/food to be had there. I had 16 samplers and the best 2 were Pere Jacques and Matilda, both were on draught. Two superb beers and both can be found in London!

Yes, melissa, I could'nt agree more. I find some US beers to be heavy-handed but Matilda is an unqualified success. A wonderful beer. Would *love* to try it on draught, pete, you lucky devil!!

Goose Island has been very good to the community of beer enthusiasts here in Chicago. The first Thursday of every month they host the Chicago Beer Society (http://chibeer.org/), where people bring in their homebrews and craft beers and Goose Island taps a new beer. When you're in Chicago, try their Green Line pale ale (it's like a cross between an American IPA and an American Pale Ale) because its available only on tap in Chicago.

Trust me all, I shall be trying all available Goose Island beers on tap and otherwise when in Chicago!!! : )

Thanks for all the recommendations - any others greatly appreciated.