Chicago Blew Me Away!

I'm sorry about the cheesey headline, but if you've followed this blog long enough you'll know that I live for them - I'm kinda like people who collect sad things like china miniature poodles or commemorative spoons, in cabinets - one is just never enough!

Anyway, onto the point of this post and it's Chicago baby! What an awesome place! I had time to do exactly zero, nada, bupkiss research before I jumped on a plane with Fantastic Mr (Dan) Fox to this Illinois city that I'd never really given much thought to before, for which I feel I should apologise somehow (not that Chicago cares much either way I'd imagine).

Upon landing it was a pretty simple mission myself and Dan had in mind, get sorted and get out to try some Goose Island on its home turf, however, we ended up in Rock Bottom Brewpub, which I'd been to the Denver version of and really enjoyed, so no complaints there! 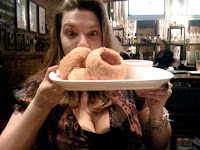 The food is pretty good, apart from the Titan Toothpicks (deep-fried full-size tortillas with mysterious meat and 'stuff' in them - truly awful and terrifying in one go) and the portions had us laughing like drains, particularly the onion rings as you can see from the picture!

The beer, which is brewed on site and all the RB beers are unique to each venue, was excellent. The pilsner they'd produced in association with the German Hop Growers was sensationally drinkable, and when we found ourselves unable to take another enormous-tasting beer, we reset ourselves with that and were off again! My personal favourite was Eric the Red, which was exactly as the beer list described it: "A dry-hopped American-style Red Ale brewed with dark crystal malt that lends a caramel and maple character to this deep ruby-colored brew. Copious amounts of Cascade and Centennial hops are addded into the fermenter to create an explosion of lemon and grapefruit flavors and aromas."

They were also kind enough to host a brunch as a judges' send-off the Sunday after the awards, which was really lovely of them and much needed by many, including the man previously believed to be indestructible - the gentle Cali giant Jeff Bagby of Pizza Port who spent a lot of his time staring at his pint with great suspicion! (I really hope this makes him laugh and not mad, seriously, he's huge!).

Also, the in-house brewmaster Chris Rafferty was still celebrating his win of a gold at the WBC for Dude, Where's My Vespa - his coffee beer - and as a result he was so high on life, it was utterly infectious.

Right, enough RB love, another must-visit when you're in town is Clark Street Ale House, it's a late-night venue so I'm not even going to venture a guess at what I was drinking other than it was all good and I'm pretty sure that Three Floyds beer was in there somewhere! I think it was Alpha King but I can't swear to it! And if you get to the point where a spirit seems like a plan then they've got an awesome whiskey selection, although my companions seemed to be avoiding the good stuff and drinking the eye-wateringly strong kind, why do I always end up with these kinds of dudes at four in the morning... in fact, don't answer that!

Moving swiftly on, at the opposite end of the scale is Publican which makes very pretty food, and really knows what to do with a pig! Their oysters were also absolutely magnificent but avoid the mussels, they were muddy and awful, and whilst it's not to my taste even Alex Barlow's weird pizza was good, squid & chorizo I believe it was, but very good nonetheless!

Having heard how good the food was I went with full intentions of creating myself a full beer & food fest that was to utterly die for but I got hooked on Lost Abbey's Framboise di Amarosa, a truly stunning and balanced sour raspberry beer that had me making all sorts of happy noises whilst drinking it, as far as I'm concerned that stuff goes with everything!!

And last, but not least, on my list of bars that should not be missed in Chicago is Piece. In fact, this was my favourite, it ticked all the boxes for me, friendly customers and staff, fantastic beers brewed on site and enormous thin-crust pizzas where you choose the toppings! Utter, utter perfection.

Owned by Bill Jacobs (below on the left of the pic), who is as deliciously entertaining as the bar itself, Piece has a great little multi-level thing going on, making the space feel much less sprawling than it could and also allowing for noise dissipation because I can attest you will need a set of lungs on you when it's busy!

It's also got a lot of pedigree in the industry's eyes as in 2006 it and its brewmaster Jonathan Cutler (who I sadly didn't get to meet) won the prestigious World Beer Cup Champion Small Brewpub and Brewmaster Award. I was, however, shown around the brewery, which is a miracle of mechanical ingenuity, an unwillingness to give up on a space and an awesome example of what you can do with some welding gear when you set your mind to it! 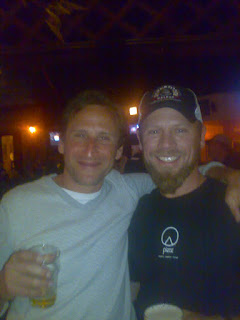 I spoke to Bill about how the whole thing came about, and I got a pretty neat story. After learning to bake from some New Jersey guys he decided to bring bagels to Chicago with his brothers, Andy & Pete, and built it up through openings and acquisitions to a chain of 17, which he sold to Big Apple Bagels in 1999.

The brewpub came about when he met the fabulous Matt Brynildson (now winning masses of awards with Firestone Walker and can be seen being tortured by me to eat weird stuff when he's in the UK) out in the park over, wait for it, ultimate frisbee! Yeah, I know, but given the shape both those boys are in I really am not going to mock how hilarious it sounds on paper! Besides, they didn't laugh at my tipsy cricket demonstration (in high heels) so I owe them that courtesy in return!

For the rest of the story, I'll let Bill tell you in his own words: "After a tournament Matt came up to me with beer, a wit beer, which he was carrying. He gave me some and said, 'we can make this'.

"At that point he set the wheels in motion as I'd always thought about bringing great thin-crust pizza to Chicago, the kind I grew up eating in New Haven. Great beer was the perfect compliment to great pizza and that's where it all started.

"Between 1997-1998 I worked with Matt (pictured above on the right) and several others constructing the business plan for Piece. Matt was going to be the brewer for Piece, but when the opportunity came in SLO Brewing Company in California, he seized it. Piece was still in its developmental stage, no lease secured at that point, and it was an opportunity Matt couldn't pass up.

"When it came to hiring a brewer for Piece in 2001, Matt encouraged me to hire Jonathan Cutler, our terrific brewer, who had brewed for him at Goose and was looking to move back to Chicago from Chico, CA, where he was brewing at Sierra. Matt worked with Jonathan initially creating a beer list based on the styles, but Jonathan has created the beers and the names for Piece."

Now, you might remember when I came back from Denver I was raving about how collegiate the beer scene is in the States and how it would be nice to see more of it over here? Well here's a great example of what I've been banging on about...

"Matt remains our closest friend and our reliable consultant/expert if Jonathan needs support. Reciprocally, Jonathan assisted Matt with his gold medal winning hefe, the same gold he won in 2006 when Piece won Champion Small Brewpub - which is great because Jonathan has won five medals for his Top Heavy Hefeweizen."

And, if all that doesn't convince you to get your butt over if you're ever in Chicago then maybe this will - one of the investors is Cheap Trick guitarist Rick Nielsen - if you can't place the band immediately you'll almost certainly know their anthem song, give it a listen and do what it says when it comes to Piece - Surrender!
Posted by Melissa Cole at 10:41

Thanks for using one of my blog titles for our upcoming Windy City visit... Now I have to think of another wind pun

it was my evil plan all along - mwah ha ha!

Well I'm off there next week, so all should be well.

Perfect timing Melissa. I'm off to Chicago next month. It will be the 5th time I've been, but have only just started to get into the pub scene - I'm always there on business. :-)
I have a couple of evenings to myself this time and so will definitely visit at least one of your suggestions.

One place I quite enjoy in Chicago is the Goose Island brewpub in Wrigleyville. Worth a visit when you next go.

The Eric the Red was, without doubt, the most drinkable beer I had all week in Chicago. Followed closely by the Pilsner. Not sure about the elevation of beer to the "highbrow" I witnessd at The Publican. Especially since a couple of the beers served there had obvious problems. Always a pleasure hanging out with you. Hope you make it to Denver