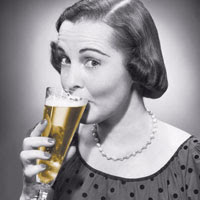 My love/hate relationship with the BitterSweet Partnership continues apace as they've just released some really good research that shows that a fifth of women are now opting for beer in pubs - so is it really necessary to produce a patronising clear beer for them - oh all right, I've already made my point about that so, let's have more of the good news stories - women are now more often opting for beer than a spirit & mixer! My full story below and then a link to the Sun's version below that - enjoy the difference!!!!

Good news for independent hosts, new research reveals nearly one in three women visit the pub at least once a fortnight, with 72% plumping for their local rather than a large or upmarket high-street chain.

The findings, released by the Molson Coors-operated Bittersweet Partnership, show excellent pub grub and atmosphere are nearly half the reason why they went to their local, with good value coming a close second  at 42%.
In line with the recent figures showing cask ale is the only beer category in growth, the traditional female bar order of a gin and tonic or vodka and coke has finally been ditched in favour of beer, with a fifth of women opting for a beer over 19% choosing mixers. And range is clearly also important, with nearly one in 10 wanting a broad selection of beers to choose from.
However, many outlets are still making fundamental operating mistakes, with the biggest female bugbears proving to be lack of seating (18%), an un-friendly and often unwelcoming environment (26%), cleanliness (16%) and poor music choice (21%).
The Sun's story here - http://www.thesun.co.uk/sol/homepage/news/2933700/Women-hailed-as-pub-saviours.html - oh, and if a fortnightly trip to the pub makes women 'booze-guzzling' then I presume they advocate that someone like me should be committed, or arrested, or perhaps just socially 're-programmed'?!
Posted by Melissa Cole at 04:13

read in the metro today about the women who got banned by a judge from buying & drinking any alcoholic drinks in public. she's not aloud in any shop or establishment that sells alcoholic drinks for 2 years.

I dont think im particualry well placed to comment on women and beer (other than i like both) but i will ask our lass what she thinks about it all as she likes ale and fizzy pop, sorry i mean lager and occasionlay gets stick from people for drinking it instead of wine/fruit based drinks.

whether you talk about blokes or women i think Beer still has the stigma of being for old fellas with beards and beer bellies and this is what needs to chance!

I'm working on it! In all seriousness though you're right, and I just want to see more educational work being done; if every brewer could put out a message about beer & food matching or provenance then that would be a huge step, next there needs to be better glassware and, perhaps even calorific content is important too - doesn't bother me but that's because I'm more interested in the flavour, it clearly bothers a lot of women.

And TRAIN PUB STAFF, as per Julie's comments on the last post so many barstaff in the UK totally suck at beer knowledge and that's just so bloody slack!

(apologies for the link) which is at least a step in the right direction.

(apologies for the link) which is at least a step in the right direction.ba

Thanks for picking this up Melissa - it is some really interesting research.

I do agree that much more educational work needs to be done and it's something we're passionate about at BitterSweet and Molson Coors. The piece Andy refers to is Molson Coors work with the lovely Rupert Ponsonby (and a fab way to spend an afternoon!!)

Training pub staff is all fine, but you need to motivate them to assimilate and apply the knowledge. Bar work in this country is minimum-wage, not seen as work of choice, non-aspirational.

You've been to the US - North Bar in Leeds is one place that has comparable values instilled in its staff. Knowledgeable, talkative even about beer. The Rake has improved a lot in that area too.

Bar staff in the US can earn in one night what workers here get in a week - excellent customer service and knowledge are incentivised, and maybe we have to find a way to develop similar ways to motivate staff here.

May I say that photo is awesome, especially next to your head shot.

Well, granted, it's very much a specialist beer outlet, but before the opened their sister pub on Place Fontainas, central Brussels, the owners of Chez Moeder Lambic (the original pub in St Gilles, south of Brussels) did hire all the new hands they needed and gave them - and the old hands with them - a two-week training course on all things beer.
So there still are a few visionaries out there ready to bet on training their staff for a healthy, sustainable development of their business. It also appears to be an efficient way to make the staff fell like staying for a few years rather than months.

In the US, any waiter / waitress in a bar that is worth their wages (and especially the bartenders), can at least tell you a high level description about what kind of beer they are serving. Even if it's just something that they memorized from a written description. Not all, (that would be optimistic) but most of the good ones.

I avoid the macro brews, I just don't enjoy them. So when I'm traveling, it's massively helpful to be able to tell the bartender 'I'd like something a little malty, balanced on the hops' and have him/her list out which regional beers fit the bill and what style they fit into. Granted, it's about a 50/50 proposition that I can get that. Usually though, the staff can almost always at least tell my something useful like "Pliny the Elder? Yeah, that's a double IPA".

Yesterday at Wetherspoons, well that was just something new.

P.S. Are we on for pints this weekend?

In the UK, Julie, barmaids are employed for the size of their chest and are not required to know about the products they sell. They are decoration, used to brighten up what are by and large dingy pubs.

I note it doesn't lure you into the pub that often, Cookie ;-)

@ Julie, I'm so sorry Julie, I forgot to get back to you on that, if you text me I'll let you know, I'm in the doghouse at the moment for being away for a week and then out most nights at the moment!!!

@ Sid, totally understand where you're coming from but I know asking people to raise the wages is much less realistic than asking them to improve training standards!

Completely agree on training, but problem seems to be in this country that we see service jobs as the lowest of the low... well, slightly above bankers and MP's perhaps. You do get the exceptions however. I overheard a young barman at the Gunmakers recently give a good rundown of what they've got on, how its kept etc. Contrast to a City pub I was in the other day and I had to ask 4 times for a pint of Landlord, i resorted to pointing.

For years I tried to get my wife to try ales, stouts and other beers instead of the American domestic beers she infrequently drank. Then about a month ago we spent the weekend in a nearby city with a half dozen brew pubs and awaited the judging of a dry stout I entered in my first homebrew competition (not a winner but it did receive high marks). Since then I've had to brew a pale ale and chocolate stout at her request. The woman who used to say "that beer is too dark" is now helping me empty my homebrew kegs much more quickly and bringing home six packs she wants to sample with me. There's nothing sexier than a girl who appreciates good beer.