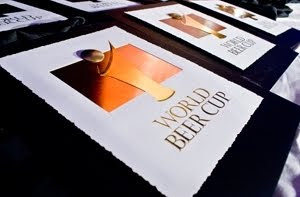 Hello all, I must apologise for neglecting you so much, with going off to the AWESOME World Beer Cup and Craft Brewer's Conference in Chicago I haven't had time to blog at all.

Because I had an insane amount of work to get done before I went I was fried and it's partly for this reason I decided not to take my ailing/near terminally ill laptop with me because I wanted to give the week my focus - I did notice that a lot of the people tweeting & social mediaing like mad sometimes missed chatting to people, which for me is what it's all about, not a criticism just a small explanation of my view on it all! And besides, if I'd had my nose buried in my phone/laptop the whole time I would have missed out on a whole lot of hugs, which is always a bonus of going to US events!

Anyhow, in case you haven't already heard, the Brits made a pretty good showing, given that there were only a pitiful 51 beers entered, which I've got to be honest I'm really shocked about. I'm aware that times are hard in the industry but surely the world-wide benchmark competition is something you should always enter?

Anyway, two golds went to UK brewers, the first was a category that I judged (along with several other UK judges including the lovely Glenn Payne and the fabulous Mr Dan Fox from the White Horse) and it was the subject of some really lively debate, which was brilliant because only good beer provokes passionate responses - the upshot of this being that Rooster's took a one and two in this category with Leghorn and YPA respectively, so well done Sean, I'm thrilled for you and feel you've taken two well-deserved wins there.

The second gold medal winner was BrewDog for its new Hardcore IPA, which is utterly delicious and the type of beer I'd love to see this brewery do more of, they have such a flair for making drinkable beers that have a higher ABV than the norm without having to resort to publicity stunts - but that's enough of that, my views have been aired and Mr Watt looked so resplendent in his kilt I was inclined towards forgiveness! Just kidding James, I hear you've got enough crazed fans without me adding myself to the list!

Anyway, the UK beer I was most thrilled to see win on the evening was Bracia from Thornbridge - I've never made any bones about the fact I think this is one of the most delicious beers I've ever drunk in my life and think it's a undoubtedly a silver medal winner, I didn't get to try the gold which is from an utterly unpronounceable brewery in Lithuania, so goodness knows how amazing that is!

There's also a shamelessly selfish reason why I was rooting for Bracia as well, when I was introducing Kelly or Stef to people I kept on saying they'd entered this sublime beer and it really should medal - so at least I didn't end up with honeyed egg on my face there!

Also, congratulations have to go to Shepherd Neame for which took a bronze in the best bitter category, it's not one that I personally drink much of but for the people of Kent it's a positive institution and we should be owning that category anyway dammit! Bitter's ours!!!!

That's just the UK update, if you want to see all the winners then the link is here, I'll be giving you my assessment on the best of the rest once I've had a nap, I didn't sleep as well on the plane as I normally do due to a lack of alcoholic intake before take-off!!

So if there are grammaticals, spelling mistakes or anything else off-kilter with this post then I apologise but, stick a fork in me, I'm done!
Posted by Melissa Cole at 05:23

Is the Brit showing really so shocking? Very few of our good brewers keg or bottle their beer, and I can't imagine the organisers would be able to keep cask in good enough form to be able to judge it fairly against fresher, more local beer. I'd have thought for a cask brewer, CBOB is more meaningful, since it's comparison among peers.

And what's going on with the number of categories? 90? Insane... even more confusing than GABF.

He's right the cask issue is a bit of a boundry. If our brewers could maybe borrow a plant or two in the US we would probably do better in catagories like mild ale and bitter.

Sid/Rob, see the latest All About Beer for a report on US cask, it’s not as rare as one would think, which in years to come should encourage Brits, another thing I find odd is that Sheps haven’t shouted it from the rooftops that they won something.

@ ATJ: I know what you're saying. In the larger US beer markets, many bars make room for cask beers. Does Alex Hall get a name-check in that article? He has been very influential in getting good beer bars in NYC to install beer engines, and persuading brewers to provide beer, and he organises cask fests. Generally, more US craft drinkers are trying it and enjoying it.

The issue to me is putting the best of British in front of a judging panel over 4,000 miles away. What category would you judge it in? "Traditionally-Brewed"? "British-Style? Is it ghettoised into a category just for cask, or put up against keg beers brewed to similar "style"?

I won't pretend that I didn't feel a little pang of pride when I heard Spitfire won! (No matter what people say about it).

Do you think that having UK judges in the Roosters category made a difference? Being from the UK, are you more likely to favour UK beers? Not for the fact that they're from the UK; for thier flavour profile?

Morning all, ahh I feel so much better than I did yesterday!

Right, firstly this competition is all bottle, so if you spend the money to make sure you get it to the depot in Denver where it's collated within a short period of time then you should be no more disadvantaged than a brewer sending it in from any other part of the world.

Secondly, even if you are worried about how well a delicate beer style might travel where were, for example, Sharp's/Harviestoun/Harvey's/St Austell/Sam Smith's with their stronger and wood-aged stuff?

The reason for saying people should enter from the UK is we had one of the best medal return percentages of any country, so it's clear that not only do we know we've got world-class beers, other people think so too!

@Chunk - not really no, it was a very unanimous decision and there was a balance of other nationalities on the table. The top three really were the best, no doubt.

Ahh right. I didn't mean to suggest it would have been intentional. More an observation about your tastes possibly being skewed towards UK stuff ... because that’s (probably) what you drink most of. The balance of judges and unanimous decision cancels that out though.

Just a though really.

Is it like GABF, where I understand brewers pay for each beer they enter, or is it free apart from shipping costs?

It's pay to play, but so is every other beer competition in some shape or form - it's probably no more expensive to ship some bottles to the States than it is to ship a cask to GBBF (in that I'm including the costs of the product/containers).

I think CAMRA buys the beer for GBBF. Not sure about shipping costs. I'm not 100% certain, but I think they also pay to ship stuff for the BSF bars.

Is there a set-piece beer fest for WBC, or is it part of the general frivolity of Craft Beer Week?

nope, there's no beer festival for WBC, a lot of beer geeks turn up in town allegedly, hoping their brewing mates can get them into some of the parties, hilarious!

Didn't know CAMRA paid for the beers, I know people have explained to me the process of how and why the ones that get there, get there, but I'm still none the wiser!!!