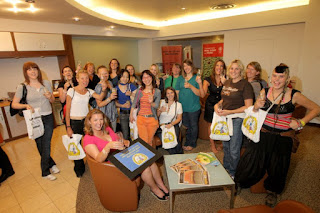 Sorry for the sarcastic headline but what a brilliant week it was at the GBBF for debunking the myth that women only like sweet fruit beers.

There was a difference in the audience this year, they were significantly more experimental and much more confident - and long may that trend continue. I also had some fellow hacks along and whilst I don't very often publish my own press I have barely stopped laughing/blushing since I perused this from BitchBuzz.com earlier - hilarious!

Anyway, back to the point of this post, the most heartening thing about the beers that emerged as winners was that not a single one is shy with flavour - if you read below there are barley wines and whisky-aged beers in there, not exactly backwards in coming forwards on the taste front!

So, yah boo & sucks to you, if you're one of these marketing bods who is trying to come up with the magic bullet for the female beer market, there isn't one.

And why? Because there are already as many diverse beers as there are palates out there, we've just got to concentrate on developing trust from the female market through sampling and improved marketing & advertising campaigns, not fluffy female-targeted, here-today-gone-tomorrow, twaddle.

p.s. must send much love to Buster, Ewan, Paul, Chris & the rest of the crew on the Scotland & Wales bar who put up with us camping at the end of their bar every night - they must have got sick of the sound of my voice - and also to the lovely Kim who put up with me every evening, Tarli who was also uber-helpful and always so cheerful, Louise for mucking in on Friday night (brave!) and Anita for being one of my biggest cheerleaders x
Posted by Melissa Cole at 01:39

I think men and women often find themselves at the mercy of, as you suggested, marketing campaigns.

I am EXTREMELY jealous that I don't live there and couldn't go. It sounds like a fabulous time, especially after meeting you at The Rake.

Hear, hear! It's true not all women want beer that doesn't taste of beer. Most women I know who like beer prefer darker malt beers and Belgian strong golden ales, where the fruity flavour is from the yeast not just some added fruit flavour.

It's great to hear your beer tours were a success. I was at the festival this year for the first time, it's a short hop from Dublin. I'll definitely be back, so many great beers.

"Bellowing"? That writer from City AM used the same description... 8-)

@Nate, I read your piece and it's got some interesting points, but the main thing that the research that's been done throws up time & again is that it's mainly beer marketing and presentation that's the issue - not the products themselves. I'm genuinely concerned that, very shortly, someone's going to package & present something very well - even if it is total crap - and we're going to see another spiral into women drinking overly sugary drinks and tastebuds atrophying into a stereotype just as we're beginning to get somewhere... time for craft brewers & pubs to step up to the plate methinks!

@Julie, it was fun and you would have loved it - have you read the bitchbuzz piece - it's hilarious!

@Bionic Laura, next year make sure you join one of the tours!

@Sid, in my defence you have to bellow to be heard at the GBBF and in the Rake on a busy evening (okay maybe I do need to adjust the volume a little at times!!)

I agree Melissa...i kind of spun my article to engage discussion. Spiffy marketing damages many of my male friends' palates. The tube convinces them (using low-brow, neolithic antics) that a real man drinks bud light!

My wife drinks everything from Russian imperial stout to lambic (though not now...she's pregnant).

Charles Papazian's "the complete joy of homebrewing" actually states that breweries (US) during WWII started making watery tasteless light lager to cater to women, since all the men were away at war. When the men came back, that's what they drank and stuck with...hmmm...

all that to say, often many drink (and eat) what they are conditioned to.

Thanks for stopping by my blog!

Hi Melissa – totally agree with you about the sampling and improved marketing and advertising campaigns. This is at the heart of what we’re trying to do with BitterSweet Partnership. We’ve had a really positive response so far to sampling sessions, especially from some women who claimed they hate beer and would never drink it.

I did read the bitchbuzz piece, it was pretty funny. Thanks for pointing it out.