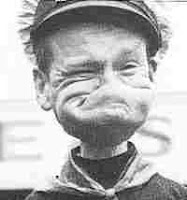 Oh dear lord, just as the Americans are beginning to get over their obsession with making stupidly hoppy beers for the sake of it and I thought the more US-inspired UK brewers doing the same without balance had called themselves to heel too, someone comes along and markets a beer as the bitterest in the world!

I'm sorry but YAWN! It's all very well saying that this beer is the most bitter in the world but perceptually you're never going to know it.

Realistically it's actually the ratio of bittering units to ABV (or OG depending on your technical bent) that's the player in how bitter a beer is percevied i.e. tastes - for example a standard British bitter of 4.2%ABV might technically have around 40IBUS but you could then put exactly the same IBUS in a barley wine and you'd barely register any bitterness.

Besides, I'm pretty sure that it's generally accepted that once you get above 60IBUs it's irrelevant anyway because all you taste is bitter itself, you can't discern different levels - I can't find my notes on the sensory training I did right now but will dig them out for verification, if anyone knows better please do contradict me.

It's just that I panic a bit when I see this kind of thing because it makes me worry that we're going to start getting into a ridiculous arms-style race around how many IBUs brewers can pack into beer because a)we're going to see a lot of the new generation of real ale fans flocking back to bog-standard lager because it will alienate too many of them and b) I'll get stuck drinking them all the time and be miserable!!
Posted by Melissa Cole at 09:04

I don't remember you taking that photo of me?? ;)
More seriously, totally agree with this, what's the point of doing this beer? It's essentially a old fashioned pissing contest and I for one don't want to have to start selling bland shite beer because there's no demand for interesting stuff, there's a lot to be said for BALANCE.

I would't panic too much Melissa! :-) I think it's a bit of fun from the brewery more than anything and should be seen like that rather than an arms (or hops) race (I hope anyway). Some might say the Hop War has already long happened though quite a few miles away from South Oxfordshire.

The test will be in the experience but a barley wine at a theoretical 500 IBUs doesn't appeal to me (and who knows what that figures actually means given the style). As we said in our post on it the quest for extreme beer is a bit impotent if there's no good beer at the end of it.

I wonder what the locals in Wantage will think!!!

@Glyn - balance very important, in heels, in life and in beer!

@Mark - sorry I missed your post until just now, completely agree that it's probably a bit tongue in cheek & a publicity stunt and I too made reference to the hop wars that have been taking place, but fortunately seem to have abated, it wasn't so much aimed at the beer drinker as the beer maker!

Brewdog made the 'world's strongest beer' - didn't hear you worry that all micros were going to give up their house brands for dynamite stuff.

I always understood it that over about 80 IBUs you stop being able to taste increasing bitterness, so I think you're right.

You're also right about the whole concept. I don't think it should be taken too seriously nor that it's intended as anything other than a gimmicky experiement, but really ... what's the point? It won't taste any good, it's just a waste of malt and hops.

Push the boundaries and go beyond what's been done before. But, when you do so in a way that you know will end in something undrinkable ... why bother?

Also, what sensory training do you mean / did you do? Sounds interesting!

@Chunk I did some sensory training pre-GABF and it was really interesting because they gave us five hop products and then asked us to rate them in order of bitterness.

It was really interesting and if I get invited back this year I'm going to book myself on the sensory course that is held.

@Anonymous - I just don't see the point, and I adore Mikkeller's beers and like the bloke when I've interviewed him. But you can't taste it and even if you do make a great beer with it, it can almost certainly be achieved without spawning a lot of wannabes that just taste terrible!

I'm not sure teh ceiling wehere averything appears to be jsut bitter is at 60 IBUs, It may probably vary a fait bit from a person to the other. But I remember a tasting with friends some tie ago where we had a fem US monsters at 90-100 IBUs and then finished off with a 15% barley wine from Mikkeller rated at 400+ IBUs, and indeed there was no discernable step up. So yes, I also believe there's a ceiling up there where the armaments' race becomes futile...
I found in interesting though, that having realised this, soe brewers notably in the US ans Denmark, have tuned away from sheer IBU numbers and try and get more intense aromas, mostly through dry hopping. I guess you can overdo it as well in this direction, but it IMHO seems to offer more of a margin for interesting and actually drinkable beers.