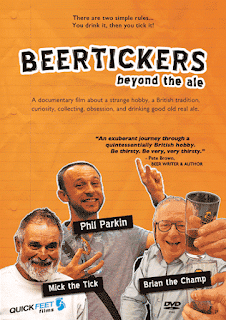 I can bang on about beer for hours, I can (when slightly happy) be more than a little pushy about insisting people try certain beers and, to be honest with myself, I can probably bore/terrify people to death sometimes.

But, do you know what, I never get treated with the kind of sneery contempt that tickers do but, love them or hate them, they are undoubtedly a major feature in the good beer landscape.

It seems to me that it's bizarrely more socially acceptable to sit in the dark, munching on Wotsits, pretending to be a Symbiant Galaxy Overlord who throws Knight Elf Mohawk grenades at other people whilst trying to win the hand of the Ethereal Princess Erutraya and not meeting a single real human being from one month to the next than be a ticker.

Which I find really weird, at least with ticking you get out of the house, you meet people, you support two important economic pillars - the pub and real ale - and you actually interact with the real world!

Now, truth be told, I've been guilty of making the odd joke at the expense of tickers, but that's because a lot of the ones I'd met have been way more wrapped up in ticking the beer than noticing what it tastes like and I just don't get that at all, but that changed when I met Tony Martin.

Tony drinks in the Rake, the White Horse and various other establishments I frequent and he's always unfailing nice, knowledgable AND gives a damn about the quality of the beer he's drinking, so I respect him and (I think) he in turn respects my take on beer too.

So, with my world view of the ticker turned upside down, I was very honoured to be asked by Phil Parkin to take part in Beertickers - beyond the ale, which delves into the underbelly (all right, that's a bit too Guy Ritchie but you know what I mean) of the ticking fraternity - and it is very much a fraternity because you really don't see anywhere near as many female tickers as blokes, but that's a whole other anthropological issue.

The film is a good fun romp through first-hand experience by Phil as he gets caught up in the mysterious world of tickingin the company of ticking legends like Mick the Tick, Brian the Champ and Dave Unpronounceable - and before you think they are names made up for the film, they aren't, that's what they're known as!

He does this by setting himself the challenge of ticking 500 beers by the project's end, and discovers that it's all rather good fun.

Along the way he also examines some of the current hysteria around booze (with a little cameo from me outside the Palace of Westminster with a horrible, never to be repeated, short haircut) and really cuts to the quick of how important beer & the pub is to the British identity.

I'll be honest, I didn't expect to like this film much but I did, I found it funny, heartwarming and sufficiently self-deprecrating towards this very British pursuit that I think anyone with an interest in beer should definitely watch it.

It's being shown at beer fest around the country I've been told, but if you visit the website then you'll be able to find out more information or buy the DVD.
Posted by Melissa Cole at 07:42

I remember being cornered by Dave Unpronounceable about 10 years ago at a Moor Brewery event (he was with a Bristol CAMRA group) — god he knew every beer he had had since he was 12 or something like that. Even the hardened CAMRA men were edging away. And I remember the excitement that ran through the room at the Taunton Beer Festival in 1997 when it was whispered that the Queen of Tickers was present.

Oh, and it's Tony MartEN.

As "fast & furious" is in the DVD bargain bin at HMV and I have yet to see the thrilling fourth instalment in the popular car chase franchise, I would buy and watch this why?

Um...You don't get treated with the sneery contempt of tickers because:
You're blonde
You're a journo
You have a life
All of the above
Did I mention blonde?

Okay, I'm going to show my best ignorant American here...what is a ticker?

@Julie - definition of a ticker is someone who 'ticks off' a beer once they have seen and tried it, they can only 'tick' a beer once and it's of some debate whether making tasting notes makes you a ticker or a scooper (yes I'm serious, not I'm not winding you up, yes I'm serious - see here http://www.scoopergen.co.uk/Lingo.htm)

@Julie: American 'tickers' congregate on RateBeer and BeerAdvocate, and drink in tiny 1oz. samples. They drive nonsense like Dark Lord Day and chase esoteric and limited batch beer. They tend not to display much love for beer as our eccentric crowd does, they just want the taste for review purposes.

I think I need to invest in a DVD of this. Check out Steel City Brewing in Sheffield, it's a brewing operation run by tickers who appreciate bold styles of beer (loosely USA inspired). Behind it are Gazza (scoopergen.co.uk) and... Dave Unpronounceable! I need to get some of their beer shipped over here to America, it will go down well.