Ahh, Monday - or should that be Arrrrggghhhh, Monday! 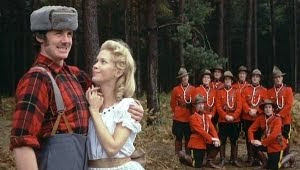 Anyway, I have some good news for any Canadians missing the joys of microbrewed beer from home - for a limited period you will be able to get Granville Island Brewing’s Lions Winter Ale at The Iron Duke, Avery Row, Mayfair from Thursday, January 21, and there's even a special ‘Canada Night’ planned to mark the arrival of the beer on the bar.

Apparently Granville Island was the first microbrewery in Canada, being established in 1984 - which I presume is right or someone would have sued them by now I'm sure - and the Lions Winter Ale does sound tasty, it's a 5.5% winter ale and seems to be universally described as being spicy, sweet and with a slight hint of nuttiness.

Although there aren't any details on what a Canada Night involves at the moment, if you turn up in costume singing the Lumberjack Song from Monty Python, or on horseback in full Mountie uniform, I'm sure you'd get at least a rousing round of applause!
Posted by Melissa Cole at 04:34