Europe to Get Stoned? 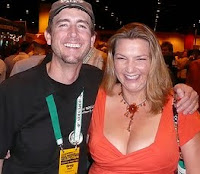 Well, somehow before Christmas I missed the announcement that Stone was contemplating opening a brewery in Europe, so I thought rather than just re-hashing the news (given that most of you have probably already heard) I thought I'd leverage the fact that Greg Koch (right) didn't stand his round at the Falling Rock when I was at the GABF* to duff him up for some further information.

Just to precis this, basically Stone has announced that it is thinking about opening a European brewery, something probably a bit smaller than they have now (which is perhaps why my suggestion of retrofitting the Leeds Tetley brewery wasn't even acknowledged) and are looking for thoughts and proposals on this.

But I wanted to know a little more about why they were thinking about this. Are they looking for super-universal domination, are they being super-green or is Greg just wanting to show off his multi-lingual talents?

Read on to find out what he had to say:

Me: What’s driving this decision? Is it economic? Environmental? Both?

Greg: Actually, the challenge and adventure is the #1 driver. Yes, we feel it is a good environmental and (will eventually be) a good economic decision, but ultimately we want to have fun.

Me: What’s you largest European market?
Greg: No good answer to this as we only export anecdotally. We only currently export to Sweden and the UK, both are minimal. We won't ship meaningful amounts of our "fresh" year-round beers due to Europe's bothersome ideas that beers need to have a 12-month date code on them. We refuse to do this since we only approve them to be 3-months old before we don't want them sold any more.

Me: You mention that the beer would be more regional, does that mean you are thinking about making different beers at this new brewery for the market?
Greg: We would brew to our style. There's already plenty of beers being brewed "for the market." If you look at the UK, for instance, that means fizzy yellow beer (based on volume). We don't make fizzy yellow beer.
We won't make fizzy yellow beer. We don't make boring beer. We make Stone beer. I would say that the majority of Brits would be disappointed in the beers we will be making if we go forward with this project, based upon the beers that the majority of the Brits drink. But on the other hand, I don't expect the majority to even know we exist as the majority of Europeans don't seek out the unique and special, they just do what what the telly tells them...just like the majority of Americans. Our beer isn't, and never will be, for them.
Me: Would it be the Stone brand or a spin-off a la He’Brew/Coney Island?
Greg: We intend to make Stone beers.

*In fairness, I probably owe about 20 people beers from various events but I have to take a shot at Greg when he's not in the room because he's too damn smart to try and take the mickey out of any other time!
Posted by Melissa Cole at 05:24

Oh please! how's that for a Daily Mail headline?!

Cooking Lager said...
This comment has been removed by a blog administrator.
6 January 2010 at 05:53

Europe's bothersome ideas that beers need to have a 12-month date code on them. We refuse to do this since we only approve them to be 3-months old before we don't want them sold any more
Yehwha'? Is this "European distributors won't touch our stuff 'cos it doesn't have a twelve-month shelflife"? What's wrong with label copy that says "This beer will still be drinkable at the date on the neck, but you'd really want to subtract nine months from that if you want it to taste how we intend"? We'll take our chances.

"If you look at the UK, for instance, that means fizzy yellow beer".

Yes Greg, you seem to have a firm handle on our drinking culture, why not come over and teach us a thing or two?

@Fatman - in fairness he does say by volume, if I know Greg what he's trying to do is provoke some debate, which he's succeeding in doing, which is cool!